Posted on August 8, 2021 by andy in Uncategorized

[UPDATED: 12 Jan 2022 with MongoDB 5.0.5 binaries] There is no official support from MongoDB for Debian ARM 64 or Raspbian64 Linux OS (now known as Raspberry Pi OS 64-bit).  You can, however, compile the MongoDB Community Edition from source.  I did just that 🙂  It did, however, take three days and a burnt Raspberry Pi 4 to accomplish 🙁  I’ll provide a link to instructions to create the executables for mongod, mongos and mongo — as well as provide a few tips to successfully compile.  Better and easier than that, I provide links to already compiled versions with instructions on how to install and use.

I recently decided to “check-in” on the status of Raspbian64, the 64 bit version of Raspberry Pi OS which is not yet released. I had been using Ubuntu Server 20.04 ARM 64-bit on a couple of Raspberry Pi 4s for various projects. One benefit of Ubuntu was official support for MongoDB. I was looking for a complete optimized Raspbian OS with GUI AND MongoDB. Searching around, I did not find what I wanted. I decided to try and create it.

Have a Raspberry Pi 4 with 4GB or 8GB of RAM and want to run the popular noSQL database, MongoDB? Read on for installing and running the latest 64-bit versions of MongoDB and Ubuntu 20.04.

The short (TL;DR) instructions are to read and follow the official install guides for 64-bit Ubuntu Server 20.04 and MongoDB 4.4 for ARM 64. The longer detailed instructions follow…

[Updated: 28 Feb 2019] Time to lose this post!  The MongoDB 3.4 binaries have vanished from the Debian buster ARM repository BUT I now have MongoDB 4.0.6 running under Ubuntu 18.04 on a Raspberry Pi 3B+  Check out this new post!

I’ve been asked multiple times if MongoDB 3.2 (or greater) can run on a Raspberry Pi.  The answer has always been “no” — as you need a 64-bit OS to run versions >= 3.2.  Some 64-bit Linux OS’s are starting to become available for R-Pi that, in theory, could run 64-bit MongoDB.  I finally found a configuration that was easy to install and use.  I now have MongoDB 3.4.18 running under Debian buster on a Raspberry Pi 3 — with a few caveats 😉

The Debian buster release for Raspberry Pi 3 is NOT yet an official image. The hardware still needs the non-free R-Pi firmware to boot. NOTE: the latest image WILL work for the new R-Pi 3B+.  There are a growing number of apps that run under buster 🙂  My install is strictly terminal based — or headless (via ssh).  The MongoDB utilities are also (now) ported.  You can run “mongod,” “mongos,” the “mongo” shell and utilities such as “mongoimport,” “mongodump,” and “mongorestore” from the local command line or via ssh.

Here is the how-to:

Detailed instructions after the break…

END_OF_DOCUMENT_TOKEN_TO_BE_REPLACED 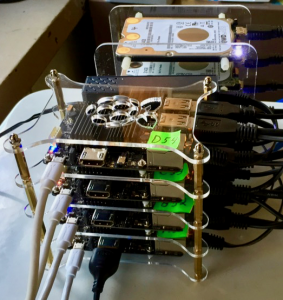 I use a MongoDB database to analyze data extracted from logs on Linux production servers that handle hundreds of thousands of users per day.  I also have databases that I use for research topics – oriented around K-12 education.  I have pulled data from The British Library and various datasets from the Europeana Collections.

I’ve blogged before on MongoDB running on a 4 ODROID C2 SBC Cluster with external SATA drives — see this post.  I had tried both Arch and Ubuntu flavors of Linux.  I pointed out then that MongoDB had an official Enterprise Server Version 3.6 for Ubuntu 16.04 ARM 64.  MongoDB Release 4.0.6 is now available for download (as of 15 February 2019).  Please check the license terms of the “Enterprise Server Version”.  There is also a “Community Server” version that might better meet your needs and/or avoid restrictions.  The Community Server install is what is described in this post.

OK, here is the quick and simple way to install the latest MongoDB on your ODROID C2 running Ubuntu 18.04…

END_OF_DOCUMENT_TOKEN_TO_BE_REPLACED

The main operating system for Raspberry Pi, Raspbian, continues to evolve.  The latest version as of August 2017 is “Raspbian Stretch” — based upon the current stable version of Debian 9.  The previous version was known as “Raspbian Jessie”.  One difference between versions is OpenSSL libraries. OpenSSL is a general purpose cryptography library that provides an open source implementation of the Secure Sockets Layer (SSL).  My previous builds of MongoDB relied on the older library.  As a result, my previous binaries for 3.0.14 and 3.0.9 do not run under Raspbian Stretch.  Given this change as well as other changes to MongoDB source and newer compilers, I could no longer compile MongoDB 3.0.14 with SSL.

After a few source tweaks and use of various compiler flags, I have manged to compile MongoDB core apps and tools.  These binaries do NOT support SSL and only run under Raspian Stretch on a Raspberry Pi 3.  [UPDATE — 2018 Mar 22] I have confirmed that these binaries work on the latest Raspberry Pi 3 Model B+ with the March 2018 version of Raspbian.

END_OF_DOCUMENT_TOKEN_TO_BE_REPLACED

Official MongoDB 3.4 on ODROID-C2 under Ubuntu 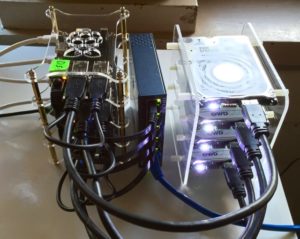 I’m a big fan of MongoDB but contrary to its “humongous” orientation, I like to think small as in ARM-based SBCs like the Raspberry Pi or ODROID-C2 and DBs under a terabyte 😉  You can get a lot of power out of tiny inexpensive computers and USB disk drives!  You can find my blog entries, below, for getting 32-bit MongoDB 3.0 working on R-Pi and 64-bit, MongoDB 3.2 working under ArchLinux ARM on ODROID-C2.

I had seen MongoDB community requests for a 64-bit ARM version and even a mention that there was “official experimental” development going on – including the efficient WiredTiger storage engine.  I recently perused the MongoDB Community Edition documentation for version 3.4 and saw a download option for “Ubuntu 16.04 Linux 64-bit ARM 64” on the MongoDB Download Center.  Ubuntu 16.04 is the default Linux supplied with the ODROID-C2 🙂  You can purchase a bare ODROID-C2 for US$40 at Hardkernel. Micro SD card or EMMC module with preinstalled Ubuntu Linux is extra.

END_OF_DOCUMENT_TOKEN_TO_BE_REPLACED

I’ve written about getting MongoDB running on the Raspberry Pi 2. View my other posts where you can get binaries (3.0.9) or learn how to compile from scratch (3.0.7). The mongo shell works great but you may want/need to code in Python, especially for device control or data logging, etc.

PyMongo is a Python distribution containing tools for working with MongoDB, and is the recommended way to work with MongoDB from Python. You can either use Python 2 or Python 3. Python 3 did not come on the minimal Raspbian Jessie image but can be installed using “sudo apt-get install python3”.

To install the appropriate PyMongo for MongoDB 3.0.x you can do the following from the command line. Note you could use “python3” where I use “python”, depending on your preference. I normally use the default Python 2.7.

Instructions after the break: END_OF_DOCUMENT_TOKEN_TO_BE_REPLACED

I’ve received feedback that some folks are having problems compiling MongoDB 3.0.7 per my instructions AND it takes a long time 😉

MongoDB 3.0.9 just became available but needs quite a few changes to source in order to compile on the Raspberry Pi.  I worked through MongoDB build scripts for ARCH ARM Linux and managed to “translate” for Raspbian (Jessie) Linux on the R-Pi 2.  Rather than creating patch files and writing instructions for building from source, I am providing my compiled binaries.  PLEASE do not post links to my binaries!  Feel free to download for personal use from this site.

[NOTE: I have compiled version 3.0.14 and created binaries for Raspbian Jessie for the R-Pi 2 & 3. NEW: I have also created 3.0.14 binaries for the R-Pi 3 running Raspbian Stretch that will also work on the new R-Pi 3B+.  I have confirmed that the instructions in this blog entry work with the new binaries.]

END_OF_DOCUMENT_TOKEN_TO_BE_REPLACED

I have successfully compiled MongoDB version 3.0.7 and tools on the Raspberry Pi 2.  Full instructions are after the break — click on “more“.  As usual I found great help from the Linux community for getting this to work on ARM7.  mongo, mongod, mongos, and tools are all working great.  The WiredTiger Engine does NOT work under 32-bit ARM but, AFAIK, all other components do 🙂

NOTE: I have made MongoDB 3.0.9 binaries available for Raspbian (Jesse) for R-Pi 2 – here.