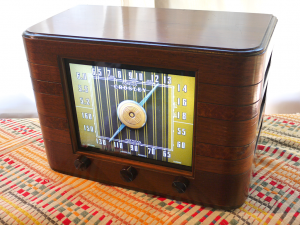 A while back, I saw a picture online of a restored antique radio that caught my attention.  The accompanying  post described the process of restoration.  I’m not into radio restorations but I think the old wood radio cases are very “cool”.  I also recently contributed to a Kickstarter project for HDMIPi, an “affordable 9 inch High-Def screen for the Raspberry Pi”.  I thought that I might place the screen and R-Pi inside an old radio case.

After looking on eBay and craigslist, I could not find a suitable enclosure for the HDMIPi and paper mockups showed the screen to be a bit small at a distance.  I used my old original iPad as a test device for measurements and viewing.  I liked the viewing and pixel size of this its screen. 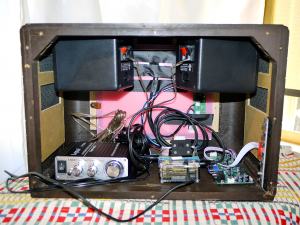 Well, the HDMIPi was going to be slow in coming (still is) and I saw (fairly) inexpensive 1024 X 768 iPad displays and driver boards on eBay.  I also found a old 1942 Crosley radio case that had a front cut-out that was very close to the iPad screen size.  The radio portion was not fixable so the case was reasonably “priced”.  I bid on it … and won.  I then had yet another project demanding time 😉

I ordered an iPad screen and display board from China, cleaned up the radio case, grabbed a lepai amplifier and speakers from amazon, added one Raspberry Pi and created my Radio-Pi.  I currently use it for playing movies and music but may make it a bedroom device for monitoring weather, time with alarm, webcams, etc.  I plan to put up more of a how-to with lots of pictures.  Let me know if you’re interested in the comments.

More picts in response to comments: